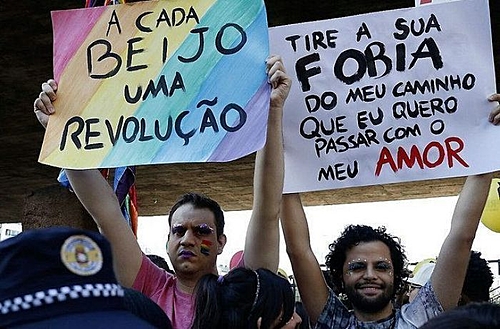 I propose an effective alliance between people. If we stop looking, we will see how amazing the way to build and establish affection, and if at some point we think “love doesn’t cross gender standards,” we’ll give up. There is nothing worse than that. Especially when affection is not just a matter of appearance; That is, the desire may be somewhat unexplained, but the fundamental question is: how much cultural norms and social learning can our desire be constructed and shaped?

Influence carries strong interventions that are suggested and proposed as “beautiful”, “loving” and “desirable”, and all of these specifications emerge as part of what they are and are meaningful taking into account the sociocultural context. Thus, it is impossible to give meaning to one of these specifications outside the cultural environment.

In some circles of LGBTQIA + people, it is common to have a critical voice when some reports refer to dominant models of gay man’s influential relationships, and we wonder why some gay men still discriminate against the social group. Predict very conservative behavior (dressing, expressing oneself, thinking politically, projecting career aspirations, love, etc.). This conservative paradigm (which is also a sociocultural model) in which many gay men live, takes us back to what we might call “homonormativity.” That is, the stereotypes of living as homosexuals, which create the norm by reactionary society as “respectable” gay and “enjoyable” homosexuality, which makes compulsory heterosexuality one of its pillars.

It is very likely that we do not realize the proper dimension of importance for how gay men are dominantly related to one another. This homogeneous tendency crosses this life and projects the alliances that occur between them. In this space, the gender rules shut down and display: too masculine, white gays, their muscles, hairstyles, haircut and well-groomed look, they are only attracted to very masculine, white gays with their muscles and hairstyles. Haircut and a well-kept look. Do you know how gender norms work on these bodies? They create the image of a desirable gay person as a person who maximizes the ideals of dominant masculinity. So, it begs the question: how much of our affection is consolidated by tyranny?

In this sense, if this dynamic ends up projecting itself as a rule, then other groups of gay men will inevitably not be subject to our desire. Generally, it is gay people who have strong identities of femininity, do not have a deep voice, they do not use masculine language, they are very communicative (judged as “scandalous”), they paint their nails, use eyeliner or buy. Some pieces in the women’s sections of the shop. And, in a society defined in ethno-racial terms, there are displacements of race and ethnicity in this gay influence; Thus, black, indigenous, and non-white gays become “less desirable” to homosexuals. And if we add the class problem to this knot, homosexuality is also categorical: even the gay who enjoys social respect, necessarily, circulates in the fields of economic power; He is a businessman, he is an architect who models his apartment with custom furniture, he is a university professor, and sex within his department is virtually unnoticed and they look almost ‘straight’. And all of this is intertwined with the beauty industry, which tends to overtake and transform into discretion: the beard (the gender marker) must be well trimmed, the hair cut through the neighborhood’s cool barber. While waiting for a beer (gender marker), the stomach and chest must adhere to the body’s stereotypes (gender marker).

In this way, gender norms carve themselves into things, change their bodies and make gay men vulnerable to “love”. And the intersections are few: we rarely see a couple of gay men, one of whom is a mechanical engineer and the other is a department store salesman (wealth must accumulate in the same nucleus so they don’t get scattered); Or one of them is up-to-date with the gym and the other is very feminine and his hair is a turquoise blue (if the masculine field doesn’t break down it needs constant hope). Generally speaking, the “gay couple” that constitutes a “respectable” gay couple is essentially a monogamous union, with the imperatives of the future of the family, the puppies, the bodies that are impeccable by the rigors of aviation career and the stereotypes of masculinity.

And the rest are less loved, fewer goals of desire, less able to develop an effective relationship. The occurrence of this predetermined influence is not entirely bizarre; After all, people continually (and unconsciously) reproduce distorted social structures, but this reproduction is always produced at some level. However, can we really, to some extent, deconstruct our desire and remove it from this racist, racist and masculine heritage?

* Leonam Lucas Noguera Cunha is a poet, professor, translator, lawyer, master of gender studies and a doctor in law from Salamanca University.

** This is an opinion article. The author’s point of view does not express the editorial line of the magazine Brazil virtually.