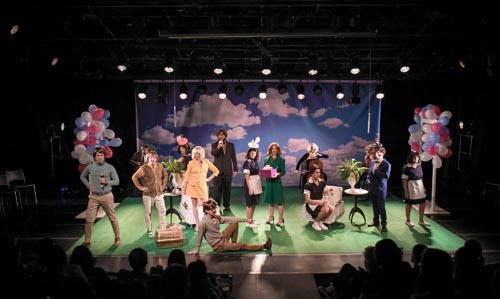 A logic emerges that no longer talks, identifies the other, they become the person to be excluded. So that is the power that the logic of the condominium has at that moment. We should throw it out, “Pure”Cleanse. The understanding of Greek catharsis, that we, our family, our southern, whites, heterosexuals; These others, outside the wall. (Christian Dunker)

My hands and feet were ashamed, and I did not shy away from anyone. The moment I made a mask and covered my face… I found the courage I could not imagine inside myself. It was liberating. (Ney Matogrosso)

Over the last two decades, in different cities such as Sೊo Paulo, Los Angeles, Johannesburg, Buenos Aires, Budapest, Mexico City and Miami, different social groups, especially the upper classes, have used violence and crime to justify both. Technologies of social exclusion and their withdrawal from the traditional neighborhoods of these cities. (Teresa Caldera)

Composer and playwright Don NakagawaOne of the new directors of the current Sೊo Paulo theater scene, showcasing the third of his career in 2019, Birthday of Jean Luca, Teatro do Absurdo has defined itself as “almost” music. Now, Montage gets a new presentation MauaIn Greater SP, The Municipal TheaterOn May 8, at 18:00 p.m.

Strongly influenced by the dramaturgy of Samuel Beckett, Mattie Wisniek and Eugene Ionesco, the play describes the preparations for the birthday party of Jean Luca, the only child of a couple living in a luxury condominium on the outskirts of Sೊo Paulo. This child is never seen in the play and little is known about him, not even his age or physical appearance. Thus his presence is caused by his constant absence.

The plot takes place in a timely fashion, tailored to the party’s preparations. In the meantime, the nanny and all the people who come to this family bubble home will prove to be a threat to the life of this couple, causing excessive infatuation or deep apathy. The forum speaks of the visible and invisible, physical and subjective walls that surround us, causing disorder in the face of marginalization, isolation, social apathy, apathy and paranoia.

According to scholars, such a culture develops within a stereotypical, white, and heterogeneous society that refuses to build barriers through indifferent, personal diversity. Nullify these subjectivities. Thus, we turn our surroundings into a bubble of equality and, therefore, what you want to see in a narcissistic, predictable world is none other than yourself.

The Brazilian song is a strong expression of the beautiful language of the director and composer, who has already recorded three of his songs on Ney Matogrosso’s albums. The last, “The Nameless”, was composed for Nakagawa’s last show, “Normalopatas.”

The third play, written and directed by Don Nakagawa, is “almost” music with a theater of absurd beauty. A nurse looks after Jean Luca, the son of a couple who lives in a luxury condominium on the outskirts of Sೊo Paulo, who prepares a birthday party for a boy he has never seen in the play; Its presence is made up of its constant absence. People arriving at the nanny and family home are threatening the lives of the host couple.

Presentation: May 8 at 6pm

Tickets: Free (one hour before pick-up)