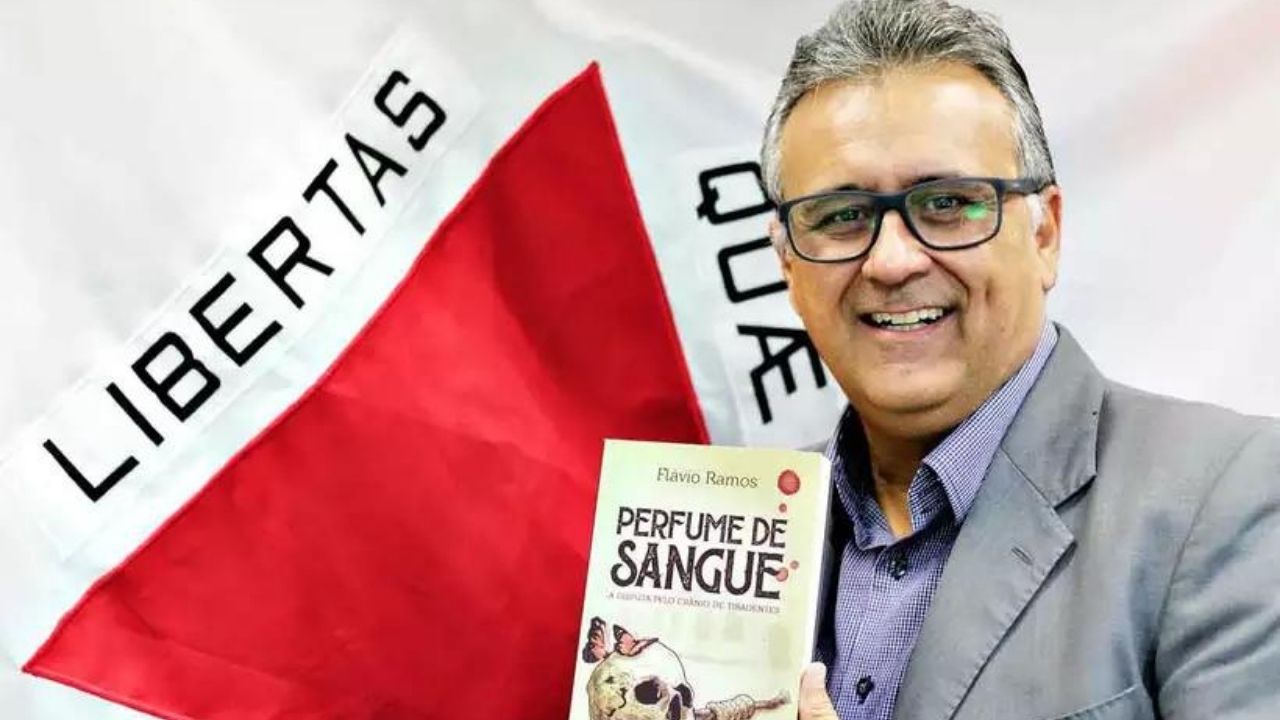 This week my interviewees include Minas Gerais Literary Disclosure, President of the Divinopolitana Academy of Letters, Lawyers and Public Servant, Flavio Ramos Born in the historic city of Sೊo Joವo del-Re. This fact prompted him to write a novel featuring real people Joaquina de Pompeau, Maria Tangara, Tiradentes And Dom Pedro I And fictional characters.

In his story, Flavio takes advantage of the legend of Minadas in the tomb of Tiradentes in the Quartel Geral city in the mid-west of Minas Gerais to tie the loose ends of Incafidencia Minera’s stories. He describes, in his creative inspiration, the theft of the head of the Tiradentes from the top of the Vilaria mast and the controversy between two powerful and wealthy women involved in the plot. You will be surprised by the tangle of adventures that tell the history of Minas Gerais in the 18th century in a somewhat funny, fun and influential way.

1- Where did the idea to write the book Perfume de Sangue come from?
I have always written many texts for newspapers and technical books on political and election marketing. I found the opportunity to do more research and write fiction on historical facts during the epidemic. In Minas Gerais, in the 18th century, I was delighted to discover that there was a regional conflict between two powerful and remarkable women who dominated Pitangui society. Joaquina de Pompeu and Maria Tangara actually existed.
I decided to write a novel that connects these women with the Incafidencia Minera and the characters of the Empire period, and thus present a plot that allows readers to learn more about our history without the rigors of tired documentary texts.

2 – Do women give “ibop” as protagonists?
Women have always been viewed and treated as extra, but we have had many scenarios in the history of Minas and Brazil, in fact, they were the protagonists in the areas where they lived. The problem is that Machismo is always selfish and hides the true value of women, especially as they stand out in Brazilian history.
The book ‘Perfume de Sangue’ breaks this sexual barrier by highlighting the important role of two women in the backdrop gates of Jericho, who at the time had evidence that Brazil was restructuring itself, fueled by the discovery of precious minerals. Influenced by the political liberation movement at home and in Minas Gerais.
Love and blood have extraordinary power. The narrative reveals a great love and revenge story built up by several love stories that deal with death and the aftermath.
If the story is good – and the characters in the book live epic moments – the female heroine will deliver a great “iBop.”

3 – How did you mix the history of Tiradentes and fairy tales? Can the reader know what is real and what is not?
When I discovered Tiradentes, I was an orphan as a teenager, who started traveling as a merchant selling various products in different ways in Minas for a livelihood. There is news that they are selling their products at Diamondina. I imagined what it would have been like to visit Pitangui, a mining town that supplied enough gold for the Portuguese Crown and had thousands of residents in the mid-18th century. I created a meeting between him. And Maria Tangara. The two engage in a quick and tedious romance that results in the opening of the Incafidencia Minera during and after.
Historian Camila Braga, who read the book for the foreword, said: “Sometimes we forget that it is fiction. As such, historical research by the authors is eye-opening. Given enough data throughout the book, this makes the reading experience even more exciting.
To me, the great fun of the Perfume de Sangue book is to encourage readers to research what is and isn’t true history.

4 – And this story of Tiradentes skull controversy?
This is the key to the symbolic moment of exploitation imposed on the Athartans. As everyone knows, Tiradentes was the only person to be executed by the Crown for encouraging Minas Gerais to become an independent country that would have the cascading effect of expulsion of Portuguese from Brazilian land. After the quarter, the parts were placed in places where they talked about the Libertarian idea. The story goes that his head was opened on a pole in Vila Rica (now Auro Preto), it was stolen and no one knew where it ended.
However, according to a mining legend, Tiradentes’ head was buried in Quartel Geral, near Pitangui, in the center of the state. Taking advantage of these stories, I decided to join the ball’s edge to create a single story that would justify the mystery: Where did Tiradentes’ head end. The funny thing is that readers will be able to take the opportunity to do more research and find out what the legend is and what the real facts are.

5- Which part of the story fascinates you most when writing?
When the Emperor received a letter from his father, Dom Joao VI, I was delighted to reproduce a story told by one of the participants beside Dom Pedro I in the EPR stream in Sao Paulo. Disgusted with the conditions imposed by the Portuguese Crown, he took the initiative to declare Brazil’s independence. In fact, as witnessed by Dom Pedro I and Father Belchier, who then went on to live in Pitangui and left the record of the incident there, not everyone knows. The book reveals one of the most famous episodes in Brazilian history, the Grito do Ipiranga scene, which is different from the official romantic historiography concept.

6 – The book has excellent characters along with Tiradentes. Tell us about the research work of these characters (Fr. Belchior, Dona Hipólita, Joaquina de Pompéu and Tangaraá)
The book ‘Perfume de Sangue’ is a fairy tale, but full of real facts and characters. The research process allowed me to find individuals who played an important role in Incafidencia and in the Portuguese Crown but did not appear in school history books. Getting them to the front was a special one. The book Perfume de Sangue shows how important names are: Father Belchier, adviser to Dom Pedro I; Donna Hippolyta, the only woman who appeared unbelievably in the Autos da Devassa; Joaquina de Pompeu is well known in Minas for her atrocities against slaves and merchants but is valued by the Emperor for owning a Crown Land in Rio de Janeiro; Along with Maria Tangara, the descendants of the Indians were an outstanding figure in Pitangui’s high society.

7 – For those interested, where to find work?
Edited a 300-page book Gulliver, Is already sold on the websites of Brazil’s major bookstores. I would like to remind you, as this is a book with a strong story, it is a great choice for people to buy as a gift for that friend or relative who enjoys reading well.